ISLAND CHILDREN ON THE MAINLAND

Posted on September 10, 2013 by suddenlystthomas

Exploring the soft mainland grass and dirt
the first week of summer.

We were off-island for much of this past summer, staying with family in New England where BabyGirl (now 5) and BabyBoy (3.5) attended a local nature day camp. At pick-up the first day, they were eagerly showing me their ‘be-yoooo-ti-ful’ leaves (big oak ones – anything deciduous for them is novel and crazy cool) when BG blurted out:

“Mongoose! Mommy, look! A mongoose!” As I was trying to see where she was pointing and about to say, ‘We have no mongooses here,’ she shouted:

“No, wait…squirrel! Look, a SQUIRREL!” And with that, the two of them raced off after this wondrous creature and watched it run up a tree and chatter at them. They stood there in awe for a good five minutes until I was finally able to pull them away by promising that squirrels were all over the place – like iguanas at home.

At this point, I fully realized how very ‘island’ my children had become in two years.

The only photo I have managed to take of a mongoose thus far (it’s to the right of the bench). They are fast. This one was in the middle of catching a young iguana (the bright green blur to its left).

So perhaps iguanas are more plentiful than squirrels. These guys (plus more off-camera) were watching us eat lunch at the pool. We had to shoo them away like flies.

BabyBoy has lived over half his life on St. Thomas; BG, well over a third of hers. The consequences of this are both subtle and obvious.

A subtle consequence: their appreciation of the vast selection in a typical mainland grocery store. Subtle, in that it hadn’t occurred to me that my Babies could, or would have yet grasped the yawning chasm between shopping experiences on St. Thomas and on the mainland. In a local Shaw’s that first week back on the mainland, they pointed at all the displays, literally gasped and exclaimed over the enormous piles of fruits and vegetables, the endless aisles of refrigerated and frozen food, and the automatic motion-sensor doors. Almost all food is shipped to St. Thomas and seems to go bad or stale quickly, and with electricity as expensive and unreliable as it is down here, you just don’t see those things (imagine for a moment the absurdity of a store with sensor doors that get stuck shut – or open, for that matter – when the power goes off often. Food stores here are going to spend their money on a back-up generator for a small freezer aisle, not miles of aisles and automatic doors).  My children were so in awe of the grocery store that several random strangers actually remarked ‘how enthusiastic’ my children were, then looked at me sort of funny. 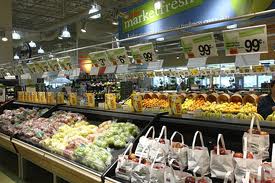 Okay, so not our New England Shaws branch, but the idea’s the same. Plentiful stuff and waaaaaay cheaper than what we get here
on St. Thomas.

Flip-side of the grocery situation down here. Fruit Bowl has lovely stuff: organic and regular, exotic and typical, local and imported, but often at high prices.

An obvious consequence: their reluctance to swim in the cool northern Atlantic Ocean. The average year-round temperature of the Caribbean Sea is just above 80 degrees Fahrenheit; the day we left in late June, it was closer to the mid-80s. The pool was even hotter. When we arrived in southern New England, the chalkboard signs on the back of lifeguard stands read a typical 69 degrees; it would eventually reach 71 while we were there – ‘almost hot!’ exclaimed beachgoers that day, without irony. BG braved the temperature disparity to boogie-board the ‘humongous’ waves (comparatively speaking as they were 2-3 feet – we have glassy calm in St. Thomas), BB went in only to his knees and preferred the 80 degree pool (‘chilly,’ he still commented), and Husband wouldn’t go in at all until I threatened him (he later got around this by refusing to don a swimsuit). I waded in if only to uphold staunch New Englander values (I’m certain ‘swimming in the Atlantic despite temperature or seaweed’ is listed somewhere).  And the seaweed, Good Lord the seaweed! BB kept saying those first days that the water was ‘dirty’ and he couldn’t see the bottom. And when the red stinky stuff rolled in, they were both appalled. 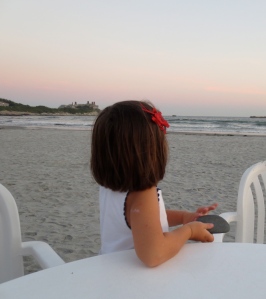 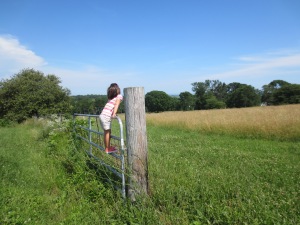 At any rate, I like that my children are a bit more ‘island’ than mainland right now. Squirrels and good climbing trees delight them up north and fallen palm fronds and rocks are good for hours of play here. They aren’t squeamish about jellyfish stings, holding sea urchins, or fish swimming around them, and they think things like elevators, escalators and sensor-motion anything are wicked fun (except toilets – automatic toilets scare the bejesus out of them).  I will, however, continue to urge them into the Atlantic Ocean I grew up in, though I may hold off on the Polar Bear swims for the time being.