Posted on January 6, 2012 by suddenlystthomas

Today is “Three Kings Day,” or the Feast of Epiphany, in the Virgin Islands as well as in Puerto Rico and much of Latin America and the Caribbean; banks, federal offices, schools, and many businesses are shut. I gather it is the beginning of many holidays down here that we have never before really observed. I am all for holidays – more so when nothing is required of us. It is a little ironic then, that I was up until some ungodly hour trying to clear up once and for all the rest of the holiday detritus (except for cards – they are still arriving and I can’t bear to take them down quite yet; besides, it is nice to see photos and cards from all our family and friends that we miss). This morning, I was reading on-line that being 12 days after Christmas (12 days? seriously?) today, Three Kings Day, is considered the last official day of the holiday season. I had been worried that my decorations were up too long; now I can say I was doing it by the books and waiting for Three Kings Day. 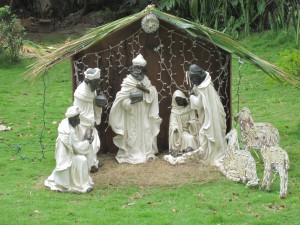 Three Kings showing up with gifts for a 12 day old baby Jesus on St. John.

To wrap up the holiday season officially: the Christmas trees lasted splendidly and no needles were dropped; we recently unwrapped a Roomba from our wonderful family and we all (cats included) spend hours watching this marvelous invention vacuuming our white tiled floors (with BG shouting instructions and giving the play-by-play); and I swear I have seen two Century trees sprouting their yellow stalk-like flowers (though the first one seemed to have evaporated before I got a photo). I have been on the lookout for these mature Agave plants for ages (since I learned they were endangered) and yesterday I saw my second one. I pulled over the car, put on the hazards, and ventured as close as possible to the edge of the underbrush/forest (whatever you call a wild place filled with palms, spiky plants, and feral cats) to take a photo. I zoomed in, got the photo, was very excited, and promptly stepped in an enormous pile of cat poop – still worth it. 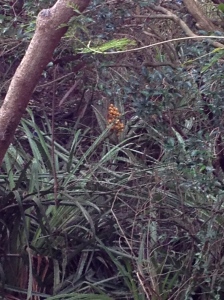 Pretty certain it's a Century Tree hidden away in the underbrush. I will keep checking (and watching for the feral cat poop).

My visiting Mother and I saw a shiny deep purple truck the other day with a terrific slogan on the side: Pimpy’s Water Delivery. I had never seen this truck or company before (it is a very small island – you see everything or everybody all the time) so we googled it. The company is based in St. John and must have been over here picking up or delivering much-needed water.

There has been a massive water shortage since November 15th on St. Thomas and St. John for homes, businesses, hotels, and schools connected to town water; hence the water truck we had never seen before from St. John. We are very lucky where we live because it has a reverse-osmosis system that turns seawater into useable water (there are a couple of these on the island, and WAPA is trying to set up more quickly), but if you venture out, places might be shut due to lack of water, and bathrooms are either closed, or ‘number 1 only.’ Some tourists have not been at all sympathetic or even appreciative of the fact that they are using a precious commodity while they are on island. The newspaper even reported terrible behavior with people trashing bathrooms or saying they will never come back. Good riddance. Be thankful today when you use water to flush toilets and turn on a faucet. We are.

Postscript: We just got the paper and the latest is that people may have water tonight. I will believe it when I hear it tomorrow, but a tentative “Hurrah!”