A Change In Seasons

Posted on December 17, 2011 by suddenlystthomas

Everyone said it would happen eventually. As the August heat and intense humidity dragged on through September and into October, locals who have lived here over a year promised it would come. November brought no discernable change in the weather, yet they swore it was right around the corner. I was waiting, quite impatiently, for something other than ‘high summer’ tropical weather. Some like that sort of heat; I am most definitely not one of them. Maybe it’s true what the locals say – that I wouldn’t mind so much when I acclimated – but I found it incredibly unpleasant to break into a sweat every time I left the house or car. Perhaps ‘acclimation’ is code for having your sweat glands removed; it must be, because none of the other parents at drop-off seemed to be in need of a change of wardrobe at 8am. From June (when we first visited) and into November, locals did in fact constantly remark on the extreme heat: ‘highly unusual for this time of year,’ ‘this shouldn’t last long,’ ‘it’ll be much better soon.’ I kept hoping they were right as our daily existence was rapidly becoming a summer Groundhog Day in the Virgin Islands.

What we didn't have.

From the NYC satellite feed on our television, we followed the change of seasons on the east coast. We watched the west coast change seasons three hour later from the San Francisco feed. I had cravings for cashmere sweaters, fireplaces, and down comforters as I watched commuters amazed at the early snowstorm this year. Heat in the 90s with humidity not far behind was becoming so interminable that I seriously contemplated turning up the A/C full blast to have a chilly autumnal day (the certain million dollar WAPA – electricity – bill stopped me). 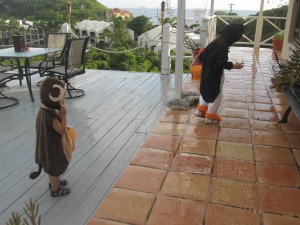 What we did have: a sweaty monkey and a sweatier penguin trick-or-treating in sandals.

And then, it happened. The Sunday before Thanksgiving, the seasons changed. We had a perfectly lovely day: hot, but not too hot, and humid enough not to feel chilly in shade. While some days were still too much, the evenings started to feel more like what one would expect on an ‘island paradise,’ with a stiff breeze off the water bringing with it the musical clanging of riggings against masts. Coincidently, that is exactly when I started to feel more settled down here. We had a couple days of tropical rains that blew sideways (on one of those days I actually put on a long-sleeved shirt – for the first time). We had some days when half the sky bucketed down warm rain, while the other half required polarized sunglasses. Those days I was constantly pulling over to take photos of endless rainbows – many double, and once even a triple.

The best was yet to come. I had heard people allude to them in hushed and anticipatory tones, though they sounded more fable than fact; two mornings ago we woke to the most wonderful winter weather of all – the Christmas Winds. Blowing in from the east at up to 25-30 knots, they are cool and refreshing, driving the humidity and temperatures down, and becoming the main topic of conversation. They can last anywhere from a few days, to on-and-off for several months. At a marina-side restaurant last night, the sailors living on their boats happily discussed the Christmas Winds (closed eyes, outstretched arms, leaning into it). One mentioned feeling chilly while rubbing his arms, then laughed at the absurdity of 76 degrees being our winter; another ageless bearded guy pointed out the northward-facing boats in the harbor, meaning that particular wind wasn’t a Christmas one. Everyone agreed not to care – winter had arrived. Today, it was a sunny 82 degrees with 58 percent humidity. I love it and I’ll take it. Welcome winter, in whatever bizarre and new form you take. 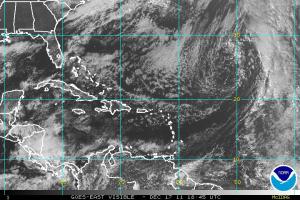 This entry was posted in Quotidian, Who Knew? and tagged Christmas Winds, electricity bill, Seasons, Virgin Islands. Bookmark the permalink.

1 Response to A Change In Seasons