Posted on December 22, 2011 by suddenlystthomas

The 2010 census puts the population of St. Thomas at 51,634. For the sake of argument, make it 51,638 (with the four of us). About a third of the entire population of the United States Virgin Islands is under the age of eighteen; assuming St. Thomas is similar, that means there are roughly 17,213 minors. As there is no exact age when children stop believing in Santa, I figure halving that number should take into account the kids ruining it on the playground as well as children of non-Santa religious persuasions. That brings us to the generous grand total of 8,606  – the population of St. Thomian children who might want to see Santa. Why do I bring up all these numbers? When you factor in his physical presence on the island throughout the month of December (excluding his actual 24th/25th appearance), I think it is possible to deduce that St. Thomas is the most Santa-accessible place in the United States (and territories, of course). 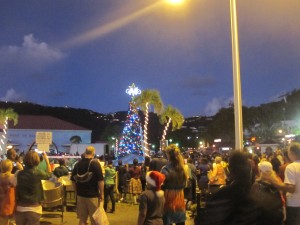 In early December, Santa began appearing all over the island. We first saw him arrive by golf cart at the tree lighting ceremony at the outdoor Havensight Mall (next to where the cruise ships dock). The first 1,000 children to walk by him got a gift; BB and BG want nothing to do with the big man in red yet, so we checked him out from afar. (I explained to BG how all these ‘Santas’ were really his cousins, sent from the North Pole to do research and prep-work). It was a crowded and energetic evening affair with beautiful steel pan Christmas Carols (performed by kids!) and much more entertainment afterward, but babies needed bed. A skinnier Santa in boat shoes showed up several days later at the neighboring outdoor Yacht Haven Grande Mall (the one with Gucci, Vuitton, and Ferragamo, among other shops) waiting for tiny shy children to approach him on his folding chair. This was a quieter daytime affair with caroling; a rainy morning perhaps scared off more people, but a sweet family day out regardless. Subsequent Santas (which we skipped for one reason or another) seemed everywhere on all manner of conveyances: there was one at the Belgian Chocolate Factory downtown (he probably drove); another Santa arrived by dinghy at the American Yacht Harbor and sat on the terrace near the Island Lattes coffee shop; yet another came to the Rotary Club breakfast at Eudora Kean High School riding a red fire truck. Politico Santa showed up to a children’s Christmas Party hosted by Governor and First Lady deJongh in downtown Emancipation Square via coattails (sorry, couldn’t resist). The final Santa that I know about will arrive Friday at the Yacht Club – I can only wonder how he gets there. Sloop?

I am sure there are other Santas I have missed, but these seem to be the big ones – the ones mentioned at the Tot Lot and playgroups, at pick-up and drop-off, in the newspaper, and on flyers around town. At the beginning of the month, I thought I would try seeing all the Santas with the babies to get the full thrust of Christmas cheer. After the first two, I decided to wait for Yacht Club Santa so we could grab dinner afterwards with friends and family (convenient Santa). And then there’s the real thing, but being so stealthly, nearly all children will miss seeing him.  At any rate, with these 7 Santas on island this month, the potential ratio of Santa:children is 1:1229. I think these numbers prove my point about St. Thomas being the most Santa-happening place around – strictly conjecture of course, but Santa Math doesn’t lie…